Catalonian Christmas (Barcelona) has a few customs that would put the typical southern festive celebration on a bizarre footing. The first involves an enhancement of the revered nativity display, you know, the thing you faithfully drag out each year and carefully arrange on the fire place mantel. Although, Mary, Joseph and the big guy are mandatory, other figures, like that crowing rooster and the skulking Lucifer you got in Mexico, can be added to make a stunningly elaborate representation of the Holy Tradition.

The Catalonian addition to this scene is a crouching farmer sporting a snappy barretina and a red belt over black pants. It is believed to bring luck and joy into the next year. The legend further notes if you do not include the figure, misfortune may follow. The figure is called the Caganer, and while you’re thinking that grandma wouldn’t mind a little foreign spice in the sacred scene, don’t act so fast. From the front, the farmer looks a little awkward, but with a quick glance at the back side you realize something is not quite right. There in the rear you are greeted by a bare buttock and at the feet a pile of— well, some might say, a number two. Wikipedia reports the use of the caganer figure dates to at least the 18th century.

In recent years the phenomena has seeped into the general culture with many celebrities now honored by their own figure. The Pope has one, along with Barrack Obama, and we can be certain quite soon, Donald Trump— he seems tailor made for the role. There are many political figures and some are obvious choices, like George W. Bush and Hilary Clinton. The web site http://www.caganer.com proclaims the figures world “famous”. The Queen Elizabeth one is so adorable, yet dignified in that regal manner. If you are nearby, you can even book factory workshop tours for your kid’s school classroom. The old adage “only in America”, is clearly one upped by Spain.

Now that we are thinking of the holidays and well-worn traditions, let’s turn to yet another special Catalonian oddity. Most have heard the stories of how Yule Logs bring the family together around the fire as the singular log burns to provide warmth and an opportunity for communion.

Well, this story comes to us via a Barcelonan Tour Guide who apparently did not know another English word for “sh***ing”, or maybe there is just not another way to tell about this peculiar custom. It took a deep dive into Wikipedia to make sense out of what she said. Again we start with the bright red barretina (Catalan hat), this time atop a log with two spindly stick legs, and a mawkishly painted smiley face— menacing eyes and a leering mouth. Called a Christmas log, it is also known as a Caga Tio. Caga, yes, similar to our first topic, this is, apparently there is not other way to say it, the “sh** log”.

Wikipedia said it with more clarity than the tour guide who was getting a bit giddy after a grueling tour with a bus load of less that agile tourist.

The Christmas log makes its first appearance at the Feast of the Immaculate Conception (December 8th). Each night from then until December 24, the children of the family are responsible for feeding the log by offering it “nuts, dried fruit, and water”. As part of the ritual, they cover the log with a blanket to keep it warm and complacent. I could find no indication of what happens to the food offerings, but it takes little imagination to determine that some parental prerogative was required.

The night of magic finally arrives, December 24th. [It should be noted here that in Spain, Three Kings Day, January 6th holds more sway than Christmas.] Now armed with sticks, the children beat the log while singing this Tio de Nadal song (courtesy of Wikipedia):

If done right with enough faith in the process (and of course divine intervention), the children look under the blanket and “discover” the log has “pooped” out loads of desirable presents and “piles of candy” (assuming they did the feeding and the beating at appropriate levels). Somehow smelly herring figures into the end of the ceremony when the log is ingloriously thrown upon the fire to be consumed by the flames. 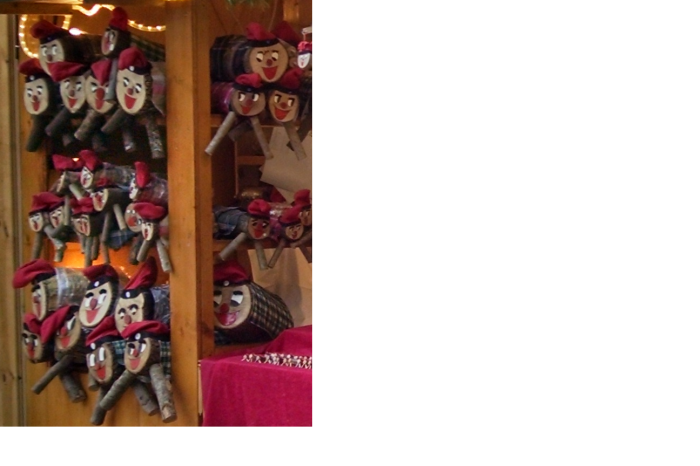 There is always a lot to think about during the holidays, now you have two new unthought-of ideas to enhance your traditions as you venture into the realm of the bizarre.

Dig Through Our Archives